The Spencers reached the peak of their wealth in the eighteenth century; in the nineteenth century they achieved the commanding heights of political power; by the end of the twentieth century they knew the extremes of celebrity. Ignatius Spencer (1799â€“1864), great, great, great uncle of Princess Diana, renounced his wealth and position in society in order to serve the poor, begging his way around the British Isles and beyond, wearing the rough black habit of the Passionists, the austere religious order he had joined. He was welcomed by popes, cardinals, and aristocrats and loved by the poor and destitute, particularly in Ireland where, even during the famine of 1845â€“52, and against the rising tide of Irish nationalism, this son of a former First Lord of the Admiralty, brother of both a former Chancellor of the Exchequer and of the governess to Queen Victoria’s children, aroused the warmth and admiration of tens of thousands of the Irish as he travelled the length and breadth of Ireland preaching in hundreds of churches and chapels. This is the story of a remarkable nineteenth-century figure who for some was ‘a dirty, mad mendicant’ and for others no less than a saint. Today Ignatius Spencer, already recognized for his life of heroic virtue, is under consideration for canonization. 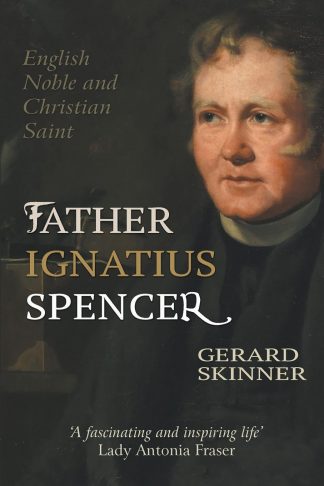 You're viewing: Father Ignatius Spencer: English Noble and Christian Saint £17.99 incl. tax
Add to cart
We use cookies on our website to give you the most relevant experience by remembering your preferences and repeat visits. By clicking “Accept All”, you consent to the use of all the cookies. You may also visit "Cookie Settings" to provide a controlled consent.
Cookie SettingsAccept All
Manage consent