From Repatriation to Revival : Continuity and Change in the English Benedictine Congregation, 1795-1850

In the wake of the French Revolution, English Benedictine monks and nuns were forced to leave their monasteries in France and were repatriated in 1795 to England, over thirty years before emancipation was granted to Catholics there. By 1850, when the English Catholic hierarchy was restored, the English Benedictines were still not fully recovered from losses that had been sustained in terms of personnel, finance and property.

This is the first book to have explored in any significant detail the plight of English Benedictine men and women in the half-century following the French Revolution. It highlights their accomplishments at a time of transition and change not just for the Catholic Church in England, but for the whole nation as well as the continent of Europe. It demonstrates that for one particular group of English religious, the early nineteenth century was not an “intertestamental age” characterised by stagnation and listlessness, but an era of new hope, new energy and important foundations. The author has drawn from a rich store of contemporary letters and documents that were previously deemed “far too recent and explosive to be allowed out of locked cupboards into print.”

A marvellous book … a work of massive scholarship … clear, vivid, and fascinating to read. — Henry Mayr-Harting

This is a book to be recommended as a learned and very readable contribution to the study of an important period in the development of English and Welsh Catholicism. — Peter Doyle, North West Catholic History

Fr Alban Hood OSB is a monk of Douai Abbey, Berkshire, and a member of the English Benedictine History Commission. 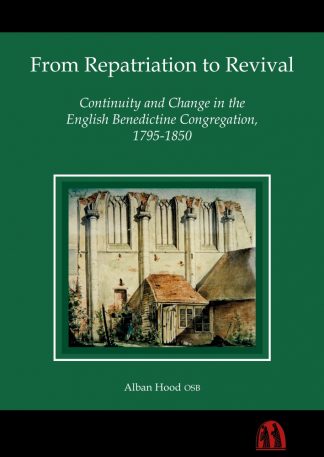 You're viewing: From Repatriation to Revival : Continuity and Change in the English Benedictine Congregation, 1795-1850 £24.95 incl. tax
Add to cart
We use cookies on our website to give you the most relevant experience by remembering your preferences and repeat visits. By clicking “Accept All”, you consent to the use of all the cookies. You may also visit "Cookie Settings" to provide a controlled consent.
Cookie SettingsAccept All
Manage consent