Inside the Mind of Thomas More: The Witness of His Writings

St. Thomas More is known primarily for his writing of a satirical work about a perfect society, Utopia, a word whose Greek origin betrays a double meaning: â€œperfectâ€ and â€œnowhere.â€ But this eventual Patron of Statesmen was not finished writing. Once he was imprisoned in the Tower of London, he poured out his soul in a series of spiritual books which have been recorded but not widely read. Now they are once again available in new editions that have appeared in recent years. Drawing on re-translations into modern English of Moreâ€™s works on the spiritual life, the authors, both lawyers, examine the overwhelming consistency in Moreâ€™s behavior between his spiritual writings and his heroic resistance to the tyranny of conscience that was being waged against him, as the only significant opponent to the destruction of the Catholic Church by the King of England. This book is an excellent introduction to all of Moreâ€™s spiritual writings and should lead the reader to the full pursuit of each of them. 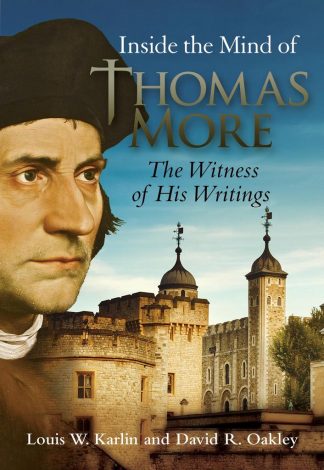 You're viewing: Inside the Mind of Thomas More: The Witness of His Writings £9.50 incl. tax
Add to cart
We use cookies on our website to give you the most relevant experience by remembering your preferences and repeat visits. By clicking “Accept All”, you consent to the use of all the cookies. You may also visit "Cookie Settings" to provide a controlled consent.
Cookie SettingsAccept All
Manage consent