On the Immaculate Conception by Dom Prosper Gueranger

Four years before the Solemn Definition of the Dogma of the Immaculate Conception in 1854, Dom Gueranger published his monumental work, Memoire sur la Question de l’Immaculae Conception de la Tris Sainte Vierge. With characteristic zeal and his outstanding sensus Ecclesiae, he wished to share an enthusiasm and conviction which had been his since his seminary days. This first ever English translation of the work is published as a collaboration between the Benedictine nuns of St Cecilia’s Abbey, Ryde, and the monks of St Michael’s Abbey, Farnborough, to mark both the 150th anniversary of the solemn proclamation of the dogma and the bi-centenary of the birth of Dom Gueranger. 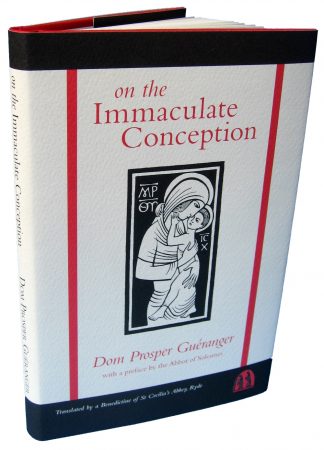 You're viewing: On the Immaculate Conception by Dom Prosper Gueranger £13.95 incl. tax
Add to cart
We use cookies on our website to give you the most relevant experience by remembering your preferences and repeat visits. By clicking “Accept All”, you consent to the use of all the cookies. You may also visit "Cookie Settings" to provide a controlled consent.
Cookie SettingsAccept All
Manage consent