The most brilliant book of apologetics in the English language. Chesterton wrote Orthodoxy in 1908 in response to a challenge from one of his readers to state his creed. Rarely has any challenge been more gloriously and chivalrously met. This is early Chesterton at his best: sparkling paradoxes, breathtaking wordplay, trenchant argument and blinding logic.

The reader is treated to a witty and insightful work, that illustrates how reasonable orthodoxy really is, despite the attacks of its critics. The book also provides a spiritual autobiography, as Chesterton employs his own discovery of orthodox Christianity in order to defend its beauty and its sanity against modern secular schools of philosophy. The book manages to intellectually challenge the reader, while still appealing to a child-like sense of awe at the world around us. 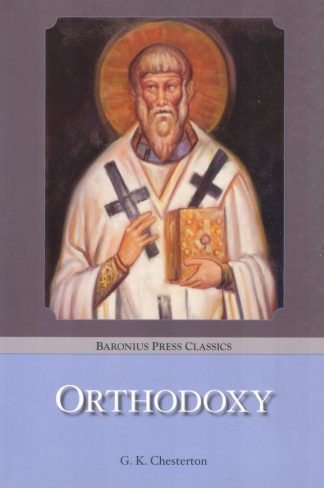 You're viewing: Orthodoxy, by G. K. Chesterton £6.95 incl. tax
Add to cart
We use cookies on our website to give you the most relevant experience by remembering your preferences and repeat visits. By clicking “Accept All”, you consent to the use of all the cookies. You may also visit "Cookie Settings" to provide a controlled consent.
Cookie SettingsAccept All
Manage consent