The range of people interested in the Popes and the Papacy is very great indeed. As soon as Pope Benedict XVI was elected enquirers wanted to know about the previous Popes called Benedict. For those who travel abroad to look at works of art a book of this kind is an essential work for quick reference. Who were the Borgia Popes. So many Popes appear in great works of art (right up till Francis Bacon) but we know so little about them.

The Popes are listed alphabetically according to the Papal names (Pius, John Paul, Alexander) but indexes also list the Popes by their family names (Borgia, Woytilja, Ratzinger). There is also a chronology so the Popes can be followed in historical order. Michael Walsh has written a short scholarly introduction in which he describes the role of the Papacy throughout history. 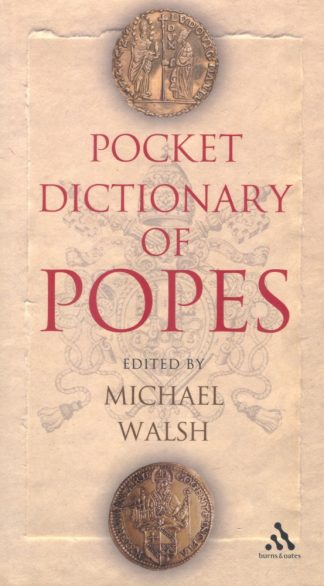 You're viewing: Pocket Dictionary of Popes £8.99 incl. tax
Add to cart
We use cookies on our website to give you the most relevant experience by remembering your preferences and repeat visits. By clicking “Accept All”, you consent to the use of all the cookies. You may also visit "Cookie Settings" to provide a controlled consent.
Cookie SettingsAccept All
Manage consent