Remaining in the Truth of Christ: Marriage and Communion in the Catholic Church

In this volume five Cardinals of the Church, and four other scholars, respond to the call issued by Cardinal Walter Kasper for the Church to harmonize “fidelity and mercy in its pastoral practice with civilly remarried, divorced people”.

Beginning with a concise introduction, the first part of the book is dedicated to the primary biblical texts pertaining to divorce and remarriage, and the second part is an examination of the teaching and practice prevalent in the early Church. In neither of these cases, biblical or patristic, do these scholars find support for the kind of “toleration” of civil marriages following divorce advocated by Cardinal Kasper. This book also examines the Eastern Orthodox practice of oikonomia (understood as “mercy” implying “toleration”) in cases of remarriage after divorce and in the context of the vexed question of Eucharistic communion. It traces the centuries long history of Catholic resistance to this convention, revealing serious theological and canonical difficulties inherent in past and current Orthodox Church practice.

Thus, in the second part of the book, the authors argue in favor of retaining the theological and canonical rationale for the intrinsic connection between traditional Catholic doctrine and sacramental discipline concerning marriage and communion.

The various studies in this book lead to the conclusion that the Church’s longstanding fidelity to the truth of marriage constitutes the irrevocable foundation of its merciful and loving response to the individual who is civilly divorced and remarried. The book therefore challenges the premise that traditional Catholic doctrine and contemporary pastoral practice are in contradiction.

“Because it is the task of the apostolic ministry to ensure that the Church remains in the truth of Christ and to lead her ever more deeply into that truth, pastors must promote the sense of faith in all the faithful, examine and authoritatively judge the genuineness of its expressions and educate the faithful in an ever more mature evangelical discernment.” – St. John Paul II, Familiaris Consortio 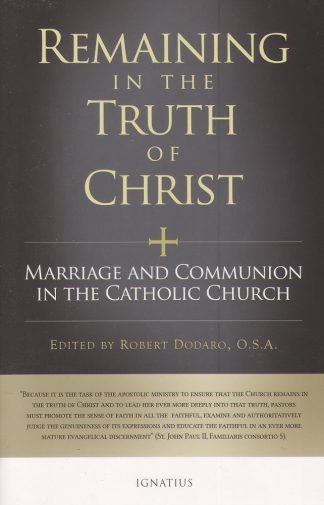 You're viewing: Remaining in the Truth of Christ: Marriage and Communion in the Catholic Church £19.99 incl. tax
Add to cart
We use cookies on our website to give you the most relevant experience by remembering your preferences and repeat visits. By clicking “Accept All”, you consent to the use of all the cookies. You may also visit "Cookie Settings" to provide a controlled consent.
Cookie SettingsAccept All
Manage consent