The Ceremonies of the Roman Rite Described

“The old Roman rite preserves its right of citizenship in the Church and cannot be considered extinguished,” Dario Castrillon Cardinal Hoyos, President of the Pontifical Commission Ecclesia Dei, declared in the Basilica of St Maria Maggiore in Rome on 24th May 2003. Today, as the traditional liturgy of the Roman rite enjoys its resurgence amongst Catholics, young and old, the need for an up to date ceremonial manual for the celebration of the traditional liturgy according to the liturgical books in use in 1962 is greater than ever in the past forty years.

This volume, a new, revised, corrected and expanded edition of Adrian Fortescue and J.B. O’Connell’s classic work, is published to guide and to assist those celebrating the traditional liturgy today. As Cardinal Dario Castrillon Hoyos states in his preface, “Dom Alcuin Reid OSB has continued the work of these distinguished experts on liturgical ceremonies by bringing this useful manual into line with the specific requirements of the liturgical books in use in 1962.”

Ceremonies covered in this manual include pontifical, solemn and low Mass, Vespers, Holy Week and the liturgical year, the sacraments, Benediction of the Blessed Sacrament, funerals, episcopal visitation and more.

“A truly sumptuous edition of this classic work” Michael Davies

“This is more than just a reprint of an earlier publication – it is a celebration of the traditional rite, both as it was and as it is now. A new edition of a classic work, adding its voice to that wonderful harmony by which the Church on earth is raised to heavenly things through the impulse of the Holy Spirit. Masterly introduction by Dom Alcuin.” Una Voce Korrespondenz

“This book sets the traditional rite in the context of the Church of today, affirming that the old rite can be a living liturgy, not some resuscitated museum piece.” Monsignor Peter J Elliott 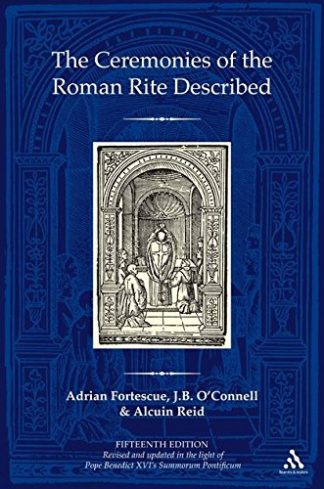 You're viewing: The Ceremonies of the Roman Rite Described £40.00 incl. tax
Add to cart
We use cookies on our website to give you the most relevant experience by remembering your preferences and repeat visits. By clicking “Accept All”, you consent to the use of all the cookies. You may also visit "Cookie Settings" to provide a controlled consent.
Cookie SettingsAccept All
Manage consent