The Legacy of John Paul II: Images and Memories

This is a glorious volume from Joseph Ratzinger (now Pope Benedict XVI), who pays tribute to his predecessor, mentor and close friend, Pope John Paul II. As Cardinal Ratzinger he was the closest Vatican prelate to John Paul II, working together with him for almost 25 years in the Vatican. When John Paul died, the world saw Cardinal Ratzinger speak so beautifully and eloquently at the pope’s funeral, then at the Mass preceeding the Papal Conclave. Soon afterwards, the College of Cardinals quickly elected Ratzinger as John Paul’s successor. This book unites these two great spiritual leaders in one powerful, deeply moving volume, complete with over 100 pages of truly inspiring, unique photos by Vatican photographer Giancarlo Giuliani (many never before published) of many striking and poignant moments of the pontificate of John Paul II as he traveled around the world. Ratzinger shares his many personal experiences and insights about this pontificate that changed the world. Illustrated. 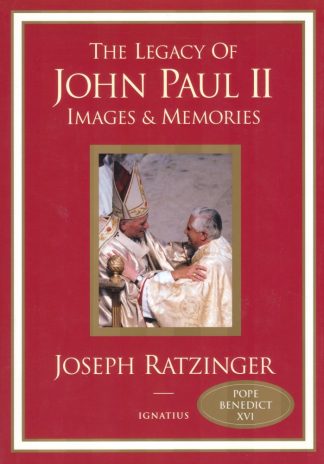 You're viewing: The Legacy of John Paul II: Images and Memories £14.95 incl. tax
Add to cart
We use cookies on our website to give you the most relevant experience by remembering your preferences and repeat visits. By clicking “Accept All”, you consent to the use of all the cookies. You may also visit "Cookie Settings" to provide a controlled consent.
Cookie SettingsAccept All
Manage consent