The Primacy of the Church of Rome

Margherita Guarducci, acclaimed scholar of ancient literature, extending her research to various disciplines, such as philology, ancient history, archaeology and epigraphy, demonstrates how they contribute toward clarifying and resolving a centuries-old problem: the primacy of the Church of Rome over the other Christian Churches.

The resulting picture spans over two millennia of history, illuminated by several â€œprimaciesâ€ of Christianity, gathered and evaluated together for the first time: ownership of the oldest Christian basilica, the oldest portrait of Christ, the oldest icon of Mary, and, most importantly, the oldest relic of St. Peter in the Vatican Basilica.

Guarducci gives evidence of certain concatenations of events which tend to confirm the primacy of the Church of Rome, the ancient universality of which survives to this day in the spiritual primacy of the Roman â€œCatholicâ€â€” that is, Universalâ€”Church. And this survival is guaranteed down through the centuries by the extraordinary presence in the Vatican of the authentic earthly remains of the Apostle whom Christ selected as His vicar on earth.

Margherita Guarducci is a former professor at La Sapienza di Roma University, and a member of various academies including the British Academy and the Accademia dei Lincei. In addition to this book, her long years of research in the Vatican culminated in her book, The Tomb of St. Peter. 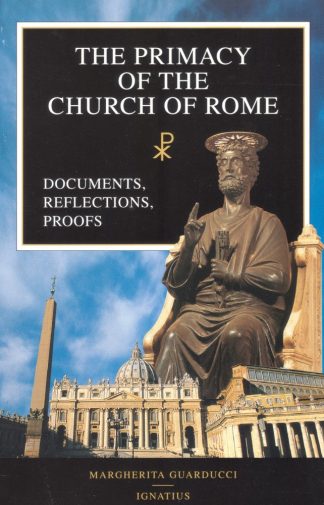 You're viewing: The Primacy of the Church of Rome £10.95 incl. tax
Add to cart
We use cookies on our website to give you the most relevant experience by remembering your preferences and repeat visits. By clicking “Accept All”, you consent to the use of all the cookies. You may also visit "Cookie Settings" to provide a controlled consent.
Cookie SettingsAccept All
Manage consent