The Theology of Joseph Ratzinger: An Introductory Study

Joseph Ratzinger first achieved international notice through his contributions to the work of the Second Vatican Council (1962-1965). His appointment as Cardinal Prefect of the Congregation for the Doctrine of the Faith in 1981 gave him a different kind of prominence – as the senior doctrinal guardian of the Roman Curia. From reform to conservation: is this change of role a ‘volteface’ in theological direction, or is it, rather, the pursuit of the ‘extreme centre’ by changing means? What is the significance of Ratzinger’s position and influence for the future development of the Church?

Aidan Nichols’ timely book is the first full-scale investigation of Joseph Ratzinger’s theology in its development from the 1950s to the present day. It presents a chronological account of the development of Ratzinger’s writing which reflects a wide range of historical and theoretical interests such as: Augustine’s ecclesiology; early Franciscanism and the idea of salvation history; Christian brotherhood; the unfolding of the Second Vatican Council; commenting on the Apostles’ Creed; explorations of the concept of the Church; preaching, liturgy and Church music; eschatology; the foundations of dogmatic and moral theology; the Church and politics; ecumenism, and the problem of pluralism.

This book is a comprehensive introduction to a figure who is in his own right, quite apart from his significance in the politics of the Church, a major German Catholic theologian of the twentieth century.

Aidan Nichols OP taught dogmatic and ecumenical theology at the Pontifical University of St Thomas at Rome. He is a member of and an Affiliated Lecturer to, the Divinity Faculty of Cambridge University. At present he is Prior of the Dominican community at Blackfriars, Cambridge, England. 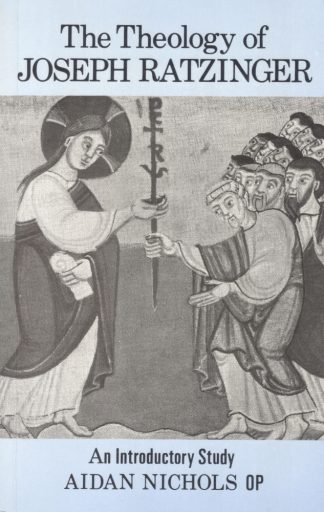 You're viewing: The Theology of Joseph Ratzinger: An Introductory Study £19.99 incl. tax
Add to cart
We use cookies on our website to give you the most relevant experience by remembering your preferences and repeat visits. By clicking “Accept All”, you consent to the use of all the cookies. You may also visit "Cookie Settings" to provide a controlled consent.
Cookie SettingsAccept All
Manage consent