This short and accessible volume tells the remarkable story of Father Augustine Hoey, a Catholic priest with his roots in the missionary tradition of Anglo-Catholicism, in both the UK and Africa. Written to mark his hundredth birthday the book draws on the personal recollections and writings of Fr Hoey as well as impressions from those who have met him and, in many cases, had their lives changed as a result.

Through various moments of drama, such as surviving a wartime bomb and witnessing the tightening grip of apartheid in South Africa, Fr Hoey’s active life has concealed an inner desire for contemplation and intercessory prayer.

After becoming a Roman Catholic in the 1990s, his work as confessor, spiritual guide and preacher was based at Westminster Cathedral. At the age of 98, he moved to Walsingham, Norfolk to fulfil the vocation he felt as an undergraduate on his first visit to the Shrine of Our Lady.

As well as being of interest to anyone who has met or heard of Fr Hoey, the book offers evocative scenes of a life of stability through a century of change.

This second edition contains a new chapter describing celebrations surrounding Mgr Hoey’s hundredth birthday, including the text of the homily of Cardinal Vincent Nichols, a personal letter from Pope Benedict XVI, Mgr Hoey’s speech, and photographs of the event.

A review of the book, written by R. Hawker, and published in Oremus – the Magazine of Westminster Cathedral. (click to see)

I must confess I am not really qualified to write this review: Fr Augustine has never (so far) heard my confession; I was never present at one of his famous missions as a Mirfield Father; I never visited him in Hulme at his house of prayer, nor was I with him in South Africa, doing his small bit for the bringing down of apartheid.

In fact, I have only met Fr Augustine once, and that very briefly, on pilgrimage to Walsingham. I felt somewhat apprehensive about this visit: I knew his name, and indeed had seen him once or twice, from afar, at the Cathedral, moving slowly and carefully in his habit and overcoat, with his distinctive Cappello Romano. I did not really feel this was enough to warrant bearding the good Father in his lair. My friend had no such apprehensions, and so we knocked. After a space the door opened and Fr Augustine was there. My companion was visibly moved to see him, and he was all smiles and apologies and greetings. He was not able to invite us in as he had guests, but was delighted to see us if only briefly, and hoped we would return again on some other occasion.

Would it be too much to hope for another meeting? As Father is in his hundredth year, quite possibly, but, as is pointed out several times in the book, he has spent most of his last 99 years living on borrowed time: as a sickly child, then several narrow brushes with death, and now still continuing his great ministry of prayer and intercession well into riper years. Who knows?

They have done a great work in producing this little volume, and it is a sign of how well it has been written that you get the sense only of Fr Augustine: quotations flow seamlessly into the text, the only difference being that Fr Augustine’s words are italicised. Of the many, and very varied contributors that they have been able to track down: Rowan Williams, Mgr John Armitage, those who knew him on the estate in Hulme, those who knew him in South Africa, and some of the very many people to whom he has been spiritual director over the years.

What I enjoyed particularly were the descriptions of the Missions he undertook in Anglican parishes between the 1950s and 1980s, in a style that is almost departed: full of drama, full of excitement (Fr Augustine showed an early aptitude for theatre which has continued through his life), and full, most importantly, of a deep and burning desire to bring people to Our Lord. These Missions seem alien now: often three weeks in a parish, with over a year in preparation for this time, with a true desire to bring a particular parish to Christ. He worked round the clock on these Missions, and expected the rest of his team (which on occasion included our own Canon Tuckwell) to do the same. When a member of the team would complain of tiredness, he would ask ‘Too tired?… For Him?’ A question that never failed to hit its mark!

The title of this little essay on this little book is ‘I’ve just gone on doing the same things’, which, of course, speaks volumes about his vocation to be a Benedictine Oblate: Stability. His life, on the outside, of course looks very different to this: there have been so many things he has done, so many places he has been, always returning though, to Walsingham (‘When I first went to Walsingham’, he remarked to another friend of mine ‘there were no Shrines!’) and throughout his life, since 1933, keeping up a life of prayer, intercession, and reparation for Christian disunity, this has been the great constant, and I hope it will be for many years to come. 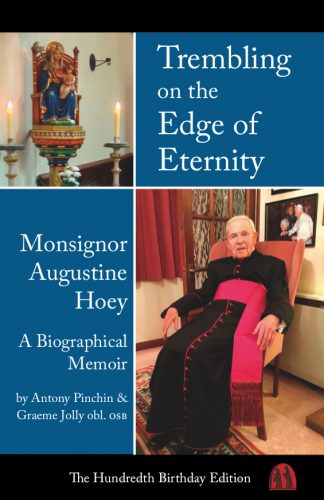 You're viewing: Trembling on the Edge of Eternity : Monsignor Augustine Hoey obl. OSB – A Biographical Memoir 2nd Edition £9.95 incl. tax
Add to cart
We use cookies on our website to give you the most relevant experience by remembering your preferences and repeat visits. By clicking “Accept All”, you consent to the use of all the cookies. You may also visit "Cookie Settings" to provide a controlled consent.
Cookie SettingsAccept All
Manage consent