Vatican II As I Saw It : Letters, Journal, Diary and Papers of Lawrence Leslie McReavy

Fifty years after the Second Vatican Council, fascinating accounts of its progress have come to light in the diaries, letters, and journals of Monsignor Lawrence Leslie McReavy, held in the Archive of Ushaw College.

Sent as a ‘peritus’ or expert, McReavy found that this duty quickly became a joy as he witnessed the optimism and enthusiasm of the Pope and the Council Fathers gathered in Rome. Students, priests and staff at Ushaw College, Durham, were kept abreast of progress in regular letters which dealt not only with matters doctrinal and liturgical, but even culinary and sartorial, as the Council unfolded. The McReavy archive is a precious resource for anyone who wants to know the Council, presenting an eyewitness account just as eye-witnesses are becoming something of an endangered species. It is the Council, literally, as he saw it.

Dom Cuthbert Johnson’s academic work along with his knowledge and experience of life in ecclesiastical Rome, make him uniquely-placed to unlock this important resource. He is to be congratulated for his service to the Diocese of Hexham and Newcastle and to the whole Church in his careful preparation of this book.

Abbot Johnson has done a signal service in rediscovering, selecting, transcribing and researching this documentation. The different genres of material represent several passages or brushstrokes on the overall picture: free narrative, minutes, working syntheses, formal retrospective overviews. The editor does well to let the documentation speak for itself. The prospective reader can hope to find in this varied dossier a fascinating account of the Council and its workings. All with a heart-warming humanity.  — Anthony Ward, S.M.

Monsignor Lawrence Leslie McReavy influenced generations of priests trained at Ushaw College where he taught for forty-five years and was nicknamed ‘Bomb’. In addition to his work for the Preparatory Commission of the Second Vatican Council and as a peritus, he was a highly-respected Canon Lawyer who worked on the 1983 revision of the Code of Canon Law. For his monumental service to the local and wider Church, he was, in 1989, appointed a Protonotary Apostolic. He died the following year aged eighty-seven.

Abbot Cuthbert Johnson OSB retired as abbot in 2008 after twelve years of abbatial service at Quarr Abbey in England. A Benedictine monk of the Solesmes Congregation, Abbot Cuthbert gained his doctorate in Sacred Liturgy from the Pontifical Liturgical Institute of Sant Anselmo, Rome, before being called from his monastic duties in 1983 to serve as an Official of the Congregation for Divine Worship before being elected abbot in August 1996 upon the sudden death of Dom Leo Avery. Abbot Cuthbert is a Consultor of the Congregation for Divine Worship and an Advisor to the Vox Clara Committee. He was elected President of the Henry Bradshaw Society in April 2007.
Saint Michael’s Abbey Press, 2015. Sewn hardcover, 464 pp. 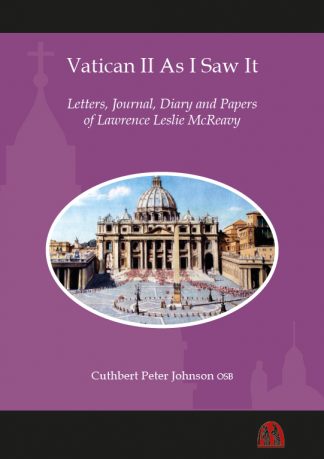 You're viewing: Vatican II As I Saw It : Letters, Journal, Diary and Papers of Lawrence Leslie McReavy £30.95 incl. tax
Add to cart
We use cookies on our website to give you the most relevant experience by remembering your preferences and repeat visits. By clicking “Accept All”, you consent to the use of all the cookies. You may also visit "Cookie Settings" to provide a controlled consent.
Cookie SettingsAccept All
Manage consent