We Have a Pope! Benedict XVI

In selecting Cardinal Joseph Ratzinger to lead the Church, the cardinals chose a man they had known well for many years, but one who remains relatively unknown to most of the worldâ€™s Catholics.

Now, noted Catholic author and historian Mathew E. Bunson, D.Min., provides a detailed portrait of Benedict XVI, introducing Catholics to a man of powerful intellect and confident faith who now must lead the Church as it confronts some of the most challenging issues facing modern men and women. Bunson examines:

Pope Benedict XVI, like many people including myself, is very uncomfortable with some of the trends that came after the Second Vatican Council, which ended up in destroying large segments of religious life, undermining vocations, undermining Catholic theology and moral teaching. When people say that heâ€™s a conservative, theyâ€™re saying that he wants to restore those vital parts of the Catholic Christian life. Iâ€™m one hundred percent in agreement with him. – Father Benedict J. Groeschel, C.F.R.

[Pope Benedict’s] acceptance of the humanly crushing burden of the See of Peter tells us something important about the man: Like John Paul II, this is a Christian radical who long ago handed his life over to the will of God, manifest through the call of the Church. – George Weigel 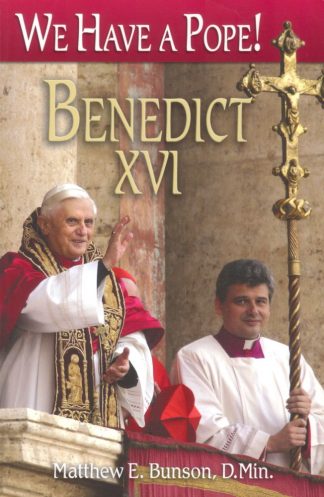 You're viewing: We Have a Pope! Benedict XVI £9.99 incl. tax
Add to cart
We use cookies on our website to give you the most relevant experience by remembering your preferences and repeat visits. By clicking “Accept All”, you consent to the use of all the cookies. You may also visit "Cookie Settings" to provide a controlled consent.
Cookie SettingsAccept All
Manage consent