“In his encyclical, Ut unum sint, John Paul II expressed a desire for common reflection on the exercise of papal primacy. You Are Peter is the great Orthodox theologian Olivier Clement’s brilliant response to this request. He emphasizes the history and experience of the undivided Church, before recalling the contrasting developments of eastern and western Christianity and concluding with the tasks that call us to unity. Professor Clement’s response to John Paul II is solidly rooted in the Orthodox tradition and represents the cordial and open mentality characteristic of the theologians of Saint Sergius. I would judge that it is almost exactly the kind of response for which Pope John Paul II was hoping. It is a pleasure to be able to present to English-speaking readers this concise, learned, and articulate presentation…. Professor Clement’s contribution is a beacon of hope for the future.”
From the Foreword by Avery Cardinal Dulles, S.J.

Olivier Clement is one of the foremost orthodox theologians of the day. He teaches at the Institute of St. Sergius at Paris and is a member of the Ecumenical Institute founded by L’Institute Catholique. Of his many works, the best-selling Roots of Christian Mysticism and On Human Being are available in English. 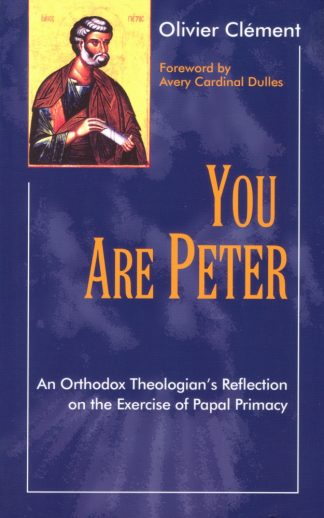 You're viewing: You Are Peter £7.95 incl. tax
Add to cart
We use cookies on our website to give you the most relevant experience by remembering your preferences and repeat visits. By clicking “Accept All”, you consent to the use of all the cookies. You may also visit "Cookie Settings" to provide a controlled consent.
Cookie SettingsAccept All
Manage consent